The 10th anniversary of Mister Roger’s death today has me thinking about his important legacy. I was lucky enough to have the opportunity to meet Mister Rogers back in 2003, not long before he passed away. It was an experience that I was absolutely unprepared for—what I thought would be just another business meeting, turned out to be a brush with true greatness. After meeting him that day, I immediately went back to my desk and started writing, trying to capture the experience of meeting him:

I met Mister Rogers today. He was in Boston to receive an honorary degree at a local college and came to WGBH to meet the Children’s Programming department. We were all excited to meet the Mister Rogers of our childhood—the guy who put on the red sweater and the blue sneakers, so predictably every day.

We were all seated, about 50 of us, around a big conference table-ready to impress him with pre-prepared speeches about our shows, our accomplishments, and our many important projects. That was how most of the time was spent, with project leaders talking about their various series, and awards, and things we as adults think make us important and impressive.

I was expecting to meet another character from my childhood…Big Bird, Shari Lewis (OK, technically she IS a real person), Grover even—I’ve met them. And it was neat. But they are characters. But Mister Rogers IS Mister Rogers. Exactly the same guy as he is on TV. It was like he walked into the room and we all became some part of our child selves.

At the end of the hour, he spoke about his life’s work. He said that what he wants to teach children is to look at the world with appreciative eyes and not judging eyes. This hit me like an arrow. He also said that if we do something with love, it will be good. Simple messages, but so true-and something we don’t hear or allow ourselves very often. I kept thinking that adults need Mister Rogers almost even more than children do—because I think we work very hard to tell these things to our children, but how often do we tell them to ourselves? At the end of the meeting, almost everyone in the room went up and got a hug from Mister Rogers, and I think more than a few of us were fighting hard to hold back tears. 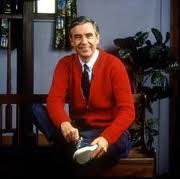 That meeting, and Mr. Roger’s words, have stayed with me. In my career I have been very fortunate to work with colleagues who share my passion for children’s media, and have inspired me to strive to make work that does not talk down to kids but challenges them intellectually and creatively—asking them to be more, do more, make stuff, try, fail, learn from it, and try again. Kids now have so many choices about the media they consume, and that’s a great thing. And we media makers have more tools and tricks at our disposal than ever before (again, a great thing!) In my estimation, the things that stand out and truly resonate with kids come from a genuine and authentic place—created by people who are passionate about what they are creating. Which I think was always the appeal of Mister Rogers. There was no artifice, Mister Rogers WAS Mister Rogers—completely genuine and authentic.

As we embark on this new venture, I will try to keep Mister Roger’s words in mind. We definitely love what we do, so I am hoping that Mister Rogers is right, and that it will be good! (I’m holding you to that Fred!) I’m zipping up my sweater and lacing up my shoes—and as Eric and I like to say, FunnyBoat Ahoy!